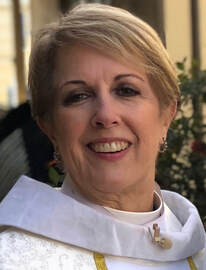 ​Maly was born and raised in Atlanta, GA. A cradle Episcopalian, she was baptized and confirmed in the Episcopal Church in Atlanta. She grew up at the Cathedral of St. Philip where she sang in the St. Cecilia Girls Choir and was active in the youth group (then called EYC). Maly graduated from Northside High School in Atlanta (Buckhead). She attended a women’s college in Gainesville, GA – Brenau College. She graduated in 1981 with a Bachelor of Arts degree (English and Voice Performance).

Maly started seminary in 1993 and graduated from the Church Divinity School of the Pacific in Berkeley, CA in 1996. She was ordained to the Sacred Order of Priests in 1997 at Trinity Cathedral, San Jose. Her first call was as youth minister at Christ Church, Los Altos. Later she was called to St. Mark’s, Los Olivos (Diocese of Los Angeles) as assistant rector and remained there until joining the staff of St. Timothy’s, Mountain View in 2000 as priest executive. She became the associate rector at St. Jude’s, Cupertino in 2010. She was called to St. Francis as rector January 1, 2013.
Maly is active in the diocese (ECR) as Secretary of Convention, President of the Standing Committee, Vocations Secretary for the Commission on Ministry, and was chair of the ECR deputation to General Convention 2015. She has served as an alternate deputy to the General Convention in 2009 and 2012, been on two diocesan strategic planning committees and was on the Bishop’s Search Committee that presented the slate resulting in the election of the present bishop, the Rt. Rev. Mary Gray-Reeves.

She is married to Allan Hughes (retired) and they live in Willow Glen. They are both active in choral music in the Bay Area and are the proud parents of two orange tabby kitties, Julius and Peaches. Maly and Allan have five grown children and six grandchildren. "What a blessing and gift to serve as rector of St. Francis...one that I will cherish." The Rev. Maly Hughes﻿