For many of us, St. Francis Episcopal Church has become our spiritual home. Some of us were born and raised in the Valley of Heart’s Delight, while many of us have come to San Jose to harvest the fruits of Silicon Valley. Young and old, we are one family in Christ, and like generations before us, we gather at 1205 Pine Avenue to nurture our spirits and community. 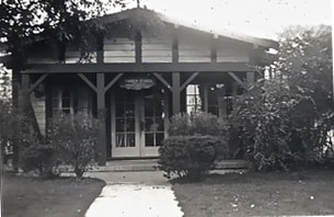 As Willow Glen blossomed into a thriving bedroom community in the early 1900’s, the need for an Episcopal Church became evident. Trinity Cathedral in downtown San Jose was becoming overcrowded, and young families in Willow Glen needed their own local parish and church school. So in 1927, Trinity Cathedral funded the remodeling of a butcher's shop at 1139 Minnesota Avenue to serve as a Trinity church school in Willow Glen. G. Arthur Abbinette, a vestryman at Trinity Church who resided in the Willow Glen area, was placed in charge as a superintendent and guided its destinies for more than ten years.

Meanwhile, a group of church school mothers began meeting in 1941 to assist Trinity in the fundraising required for the remodels. They named themselves The Saint Francis Circle, in part to honor their dear friend and educator Frances Shallenberger. "Aunt Fan," as she was affectionately known, was a retired school teacher who provided much of the enthusiasm and experience required to grow the church school.

In 1945, the vestry at Trinity, ever supportive of the growing community of the Willow Glen branch, purchased additional property across from 1139 Minnesota on Iris Court to provide more classrooms and to serve as a parish house. Yet it quickly became apparent that even this new space was inadequate. Neighborhood homes rented out rooms to accommodate the overflow of students.

In 1951, St. Francis was thriving and plans were underway for an expansion beyond the chapel to include office space for the rector and church secretary, a choir room, rest rooms, eight small classrooms, and a large primary or kindergarten room.
Parish Hall Addition

1951 also saw the death of Dr. McNaught at the age of 89. She generously left much of her estate to St. Francis. These funds covered the expansion costs and provided the foundation for a much-needed parish hall. The expansion was opened in January of 1953, and the hall was opened and dedicated to her memory on October 31, 1954.
​A brief lull now took place as the parish adjusted to its new facilities. The church school was well taken care of, but church services in the chapel were crowded and overflowed into the parish hall. The decision was then made to complete the original building plan with the ambitious construction of a spacious, modern church sanctuary.

The church during construction.